Based on textual fragments from the latest prose volume by the distinguished Austrian poet Friederike Mayröcker, TAW presents a performative encounter of speech, sound, light and movement.  Friederike Mayröckers charismatic reading is juxtaposed and enriched by carefully chosen piano scores and gentle kinetic interventions and crossings. 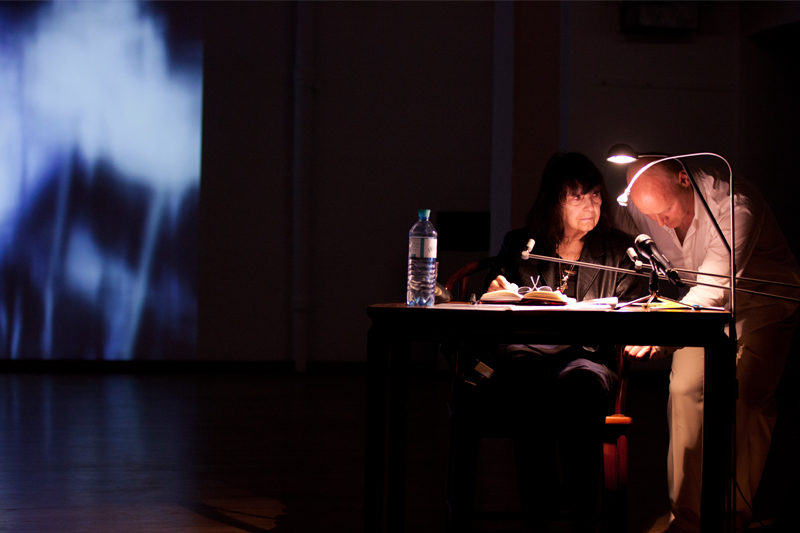 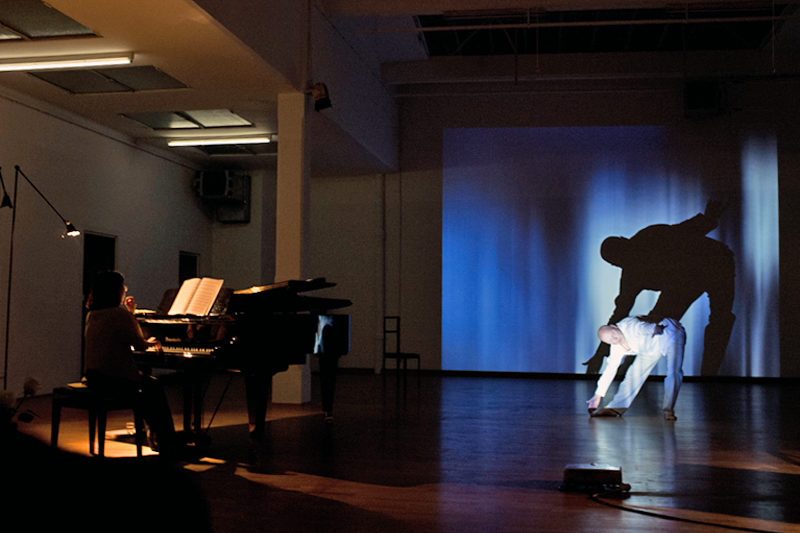 „At the age of 88, the great writer of contemporary German literature lets herself getting involved in the encounter of dance and music. (…) However, with Cecilia Li on the piano, the dancer Sebastian Prantl, Victoria Coeln at the mixing console, she has three allies who are reacting to her work emphatically. The music sounds like an echo, as if the sound compositions by David Lang, Alexander Scriabin, Philip Glass, John Cage und Claude Debussy absorb Mayröcker’s language. In the dance movements the text resonates, it is possible to decipher some moments previously described by the author. The image of the poet is captured again in the light-video-games which are transformed into a projection screen and shadow space for the dancer.“
(Edith Wolf Perez, www.tanz.at, March 2012)

Through the interweaving of voice, music, video art and dance, four artists bring together different art forms, interacting with each other on the same level and thereby creating a multi-layered total work of art. A source of inspiration was the charismatic voice and sound language of Friederike Mayröcker, who reads from her book “ich sitze nur GRAUSAM da” (“I just sit there CRUELLY”). In conjunction with the unique musical atmosphere created by concert pianist Cecilia Li, the book – which unlike its title suggests, is filled with forcefully optimistic day and night dreams – become the acoustic basis for further artistic creation.

With works by Debussy, Cage, Scriabin, David Lang and Philip Glass the sensitive pianist – who considers the symbiosis of visual, kinetic and acoustic art forms of fundamental importance for her artistic work – not only pays homage to great composers, but also provided creative stimuli for visualist Victoria Coeln.

By condensing and enhancing light thus developing light spaces she refers to as “Chromotopes”, Victoria Coeln confronts the literature and music with a strong visual language. In her reactive, in response to the sound created visuals – which incorporate scientific knowledge as well as the power of emotion and personal encounter – she integrates a video montage, showing Mayröcker reading her own lyrics.

In a Real-Time-Composition – without using pre-fabricated contents – dancer and choreographer Sebastian Prantl draws his inspiration from the media light, music and text and reacts simultaneously to the work processes of the participating artists. As a fluidum, the dance composes an interface of the different parts of the performance and establishes a relationship to the surrounding space.