Babylonian confusion of tongues? Enigma of time, born out of the spectre of the past? What does the wisdom of ancient times tell us nowadays? How do manuscripts thousands of years inform us? Humanism today – in a post-capitalistic, global world? “ME<le>A” discusses ‘communication’, from the intellectual to the absurd, from the metaphysical to the banal. 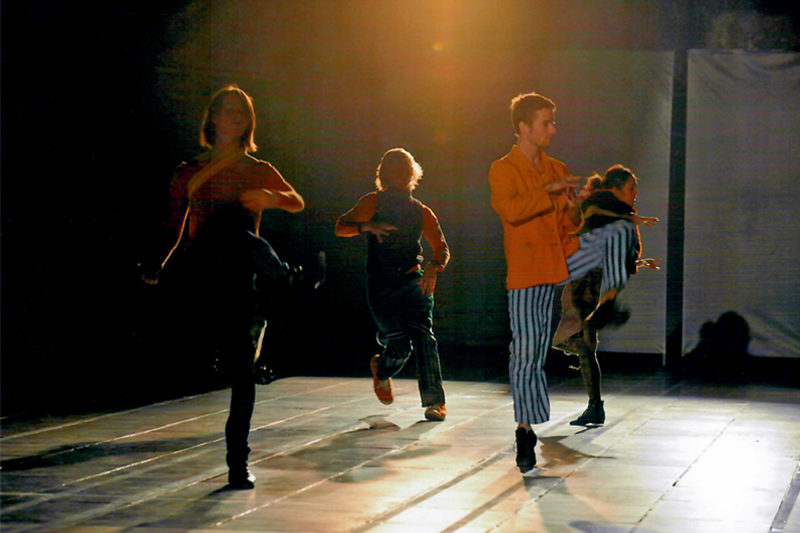 The things that were regarded as an entity in Ancient Greece (music, language and movement connected: mousikè téchne) are investigated and deciphered anew in “ME<le>A”, thus tracing the cycle of the year, whereby song texts from the Ancient World in particular are assigned to single sections. Two themes determine the cycle: man’s relationship to Ancient Gods and with the Christian God respectively, and love among sexes – the blossoming and disruption of eroticism.

Ancient Babylonian, Ancient Greek, Latin, Ancient Italian, Spanish, English and German are the languages of the occident. The arch stretches from a hymn to Ištar to poems by Archilochus and Sappho as far as C. Valerius Catullus, Q. Horatius, Carmina Burana and St. Francis of Assisi. The relationship between metre and rhythm, iso-metrics, various tone systems and real-time encounters between language, music and movement are the main targets for investigation and staging. An extraordinary dynamism evolves within project due to the discourse of generations and their specific approaches to artistic work.

The Ensemble DITHYRAMBOS comprises teachers, alumni and pupils from the Gymnasium of the Babenberger Ring in Wiener Neustadt a stronghold for Ancient languages within Austria.

The Ensemble LOGOS from the international harmony centre of the University of Music and Performing Arts Vienna uses interdisciplinary research and applied theory. The Institute of Harmony focuses on the analysis of form, design and planning, with art-based research.