Kairos links the medium dance, film and music, all of which react to composition and transformation – opening the opportunity for KAIRÓS in the sense of a Real-Time-Composition, of a gash in the flow of CHRONOS. The ancient Greek invented the dual terminology: Crisis and Kairos in order to  bridge past into future, promoting a positive energy for progress. 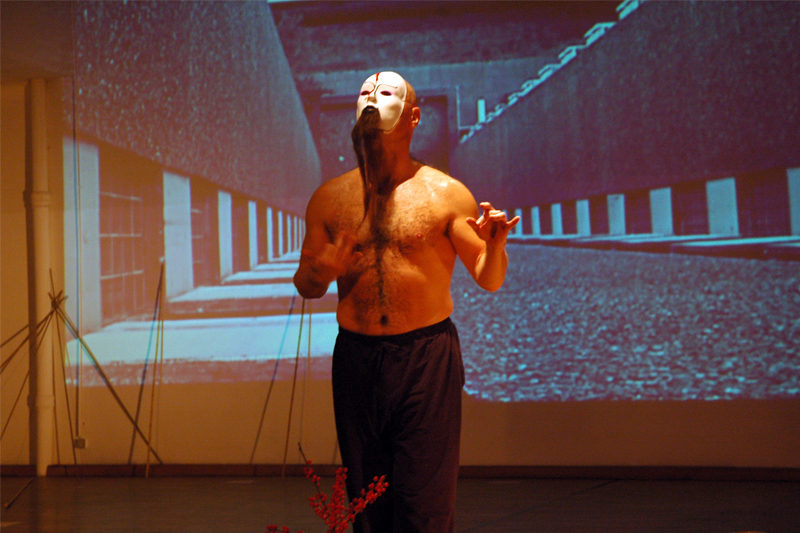 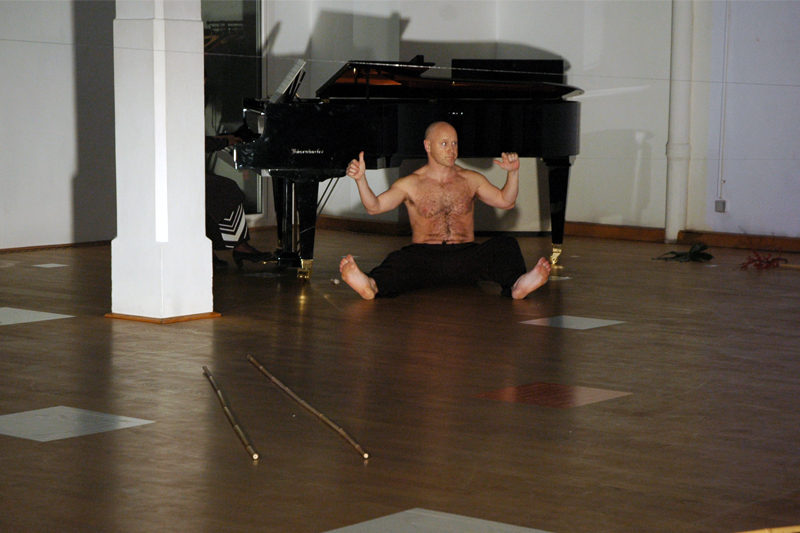 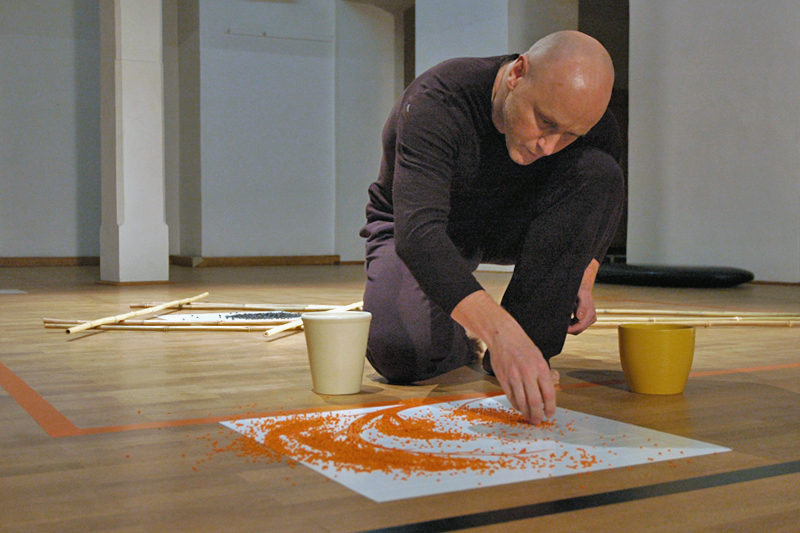 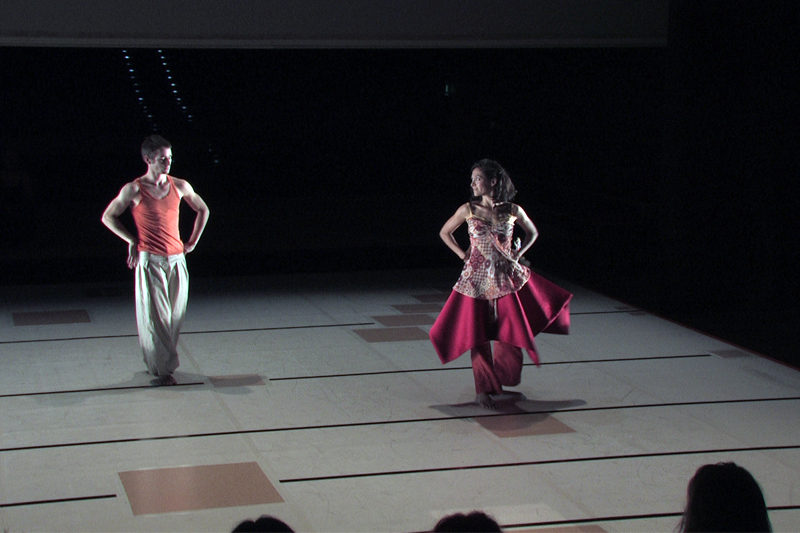 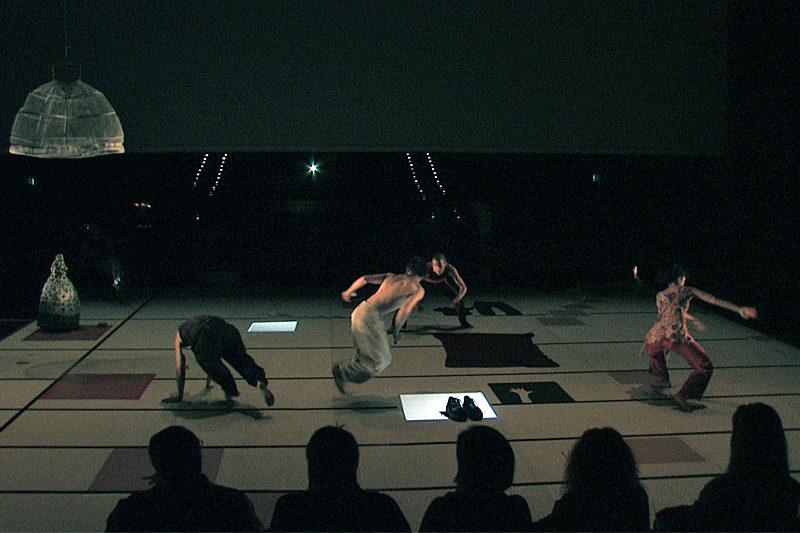 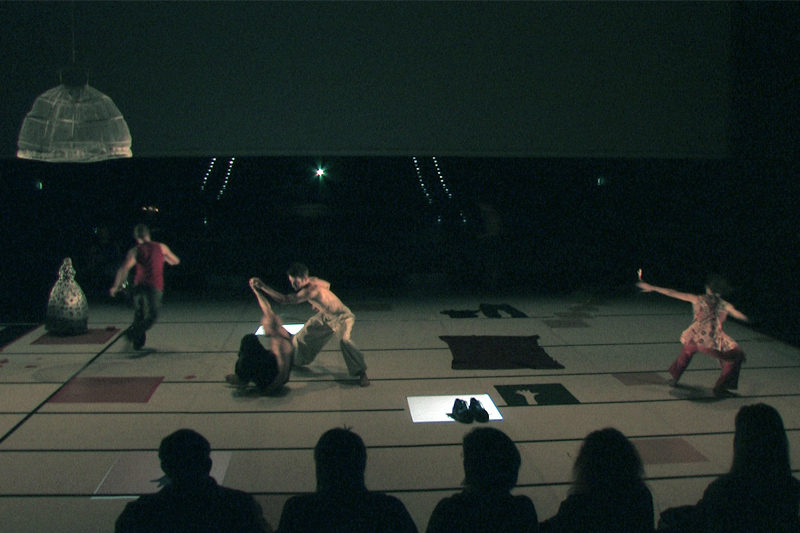 „A man in middle age is measuring his space using long bamboo sticks and is decorating it with coloured grains while the world outside (on video) passes him by. His bamboo stick becomes a magic wand, the touch of which turns water magically into steam and makes a drop of water change shape – small, unexciting changes.

In “Kairós in[ter]vention” Sebastian Prantl has composed the essence of his long, systematically pursued artistic investigation into a real time composition lasting more than one hour. The spectator, in his space, feels like he is on an island where time has stopped. The proximity to Far Eastern culture is tangible. With his ability to animate spaces, Prantl sparks off a wide range of emotions using minimal means. The atmosphere is transformed from gravely oppressive to cheerfully serene even as far as ironically amusing, it is hypnotic and captious – you cannot escape the magician. That is also due to the carefully composed musical direction of items with a common theme, by the New York composer David Lang, by György Ligeti and by Philip Glass some on tape, some played wonderfully musically on the piano by Cecilia Li.

Nowadays, Prantl’s name is synonymous with authentic performances, in which nothing is acted or played. In this connection, the simple evening program that deals briefly and appropriately with the individual parts of the evening should be mentioned – it keeps its promise: Kairós – the quality of the moment.”
(E. Wolf Perez, Tanz.at, 7.12.07)

Inspired by “KAIRÓS in[ter]vention” solo/duo experience a newly formed TAW workshop company compiles its own characteristic embodiment of the ‘lapse of time’ – the special moments of life preciously to be discovered.

The choreographic material of the TAW workshop company forms the basis for further works both inside TAW and outside, within the urban landscape of the booming 7th district of Vienna. A loose dramaturgy of ‘time codes’ and ‘spatial behaviour agreements’ in the public space of the district – involving interventions and inspections at all times of day and night – fosters an accumulative contextualisation, generating new approaches for the protagonists to work with -discovering and occupying specific terrain. The flow of adequate movement vocabulary in the public develops from experience of permanent relationship mechanisms of places and people, triggered by acoustic, visual and energetic impulses but also by confrontations. Ensemble configurations such as solo, duo, trio, group, crowd, duplication, anonymous hiding, reflection, shifting in time and space are investigated thus intensifying multiplying, creating trust and determination. As the choreographic material, deconstructed in manifold ways is put under pressure, it reappears in new variations from day to day.

The research project starting in the TAW studio expanding into public space, zooming in on various kind of audiences, requires an experienced “theatrical „code. The protagonists, having various degrees of experience in this regard are challenged by entering into manifold dialogues and contacts with the audiences. Coming from various cultural (street) codes: Mexico, Brazil, Italy, Ireland, Argentina, Austria, Germany, and South Africa, the analysis is picturesque and the findings divers, indeed!

After a TAW studio research and an outdoor analysis (street production), the stage production for the Festspielhaus St. Pölten, Lower Austria generates new and heightened working methods. For this, the ‘KAIRÓS mind’ is not just the content of reflexion and a secured repertoire status but rather a radical working tool for the stage investigation.

The enhanced analysis in dance, music and film releases new narratives and symbols. The discourse is intensified and questions asked more profoundly – reaching from Greek mythology through Christian-European traditions and melting into universal Mandalas beyond post-modern (pop) culture.

The choreography circles around scenes, with logos like “A” und “O”‘, “Samba Bamba”, “Ananas Country” or “Mary has a little lamb”…. The protagonists provoke the implementation of each time anew, in the sense of a re- and deconstructed drama of set modules. The protagonists pick up symbols as a group as well as within a solo endeavour, to test and verify them in the sense of KAIRÓS mind: inspired to find the right activity at the right time.

Tempi, syncopation and accelerando are determined within, challenged by stage conciliation and expansion. Film images juxtapose and enhance the plot.

„On the opening day, a world premiere was presented: KAIRÓS in[ter]vention by Sebastian Prantl’s TAW. It is all about physicalness, namely about energy from young, well-trained dancers. Prantl examines the quantity and quality of the Greek expression kairós – which stands for the quality of time. He trained the dancers to tell short stories in various constellations … Sometimes there are Dionysian moments followed by intense encounters. Brilliantly danced, this piece evokes a certain feeling of freedom and candor, which can result from dance at its very best moments.“
(Brigitte Suchan, Wiener Zeitung, June 19th 2008)

„In KAIRÓS in[ter]vention various encounters within the ensemble – seemingly at random – are the centre of the performance. Being fleeting moments or more intense relationships – these clear-cut elements cannot halt the flow of time : The stage was opened up to its maximum extent providing the dancers with every chance to let off steam. This piece is characterized by juvenile temperament, light-heartedness and an unresisted desire for exercise.“
(Ditta Rudle, www.tanz.at, June 23rd 2008)