Land Body Scape – the Dreaming of Bones takes up a universal topic life (and death) suggesting and discussing a journey into the “hollows” of human fantasy following the poetic imagery of the author W.B. Yeats. The abstract film language of Duncan Ward evokes a multitude of content with regard to space and art, providing timing and structure for the dancing protagonist Sebastian Prantl. 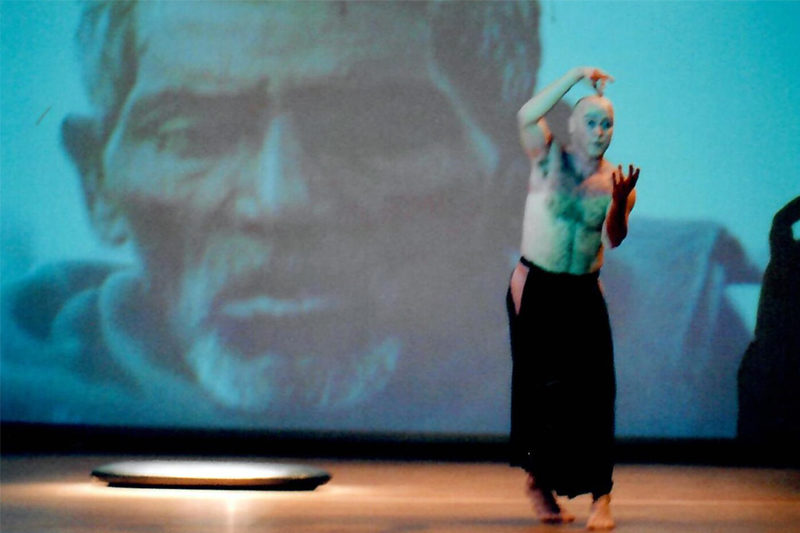 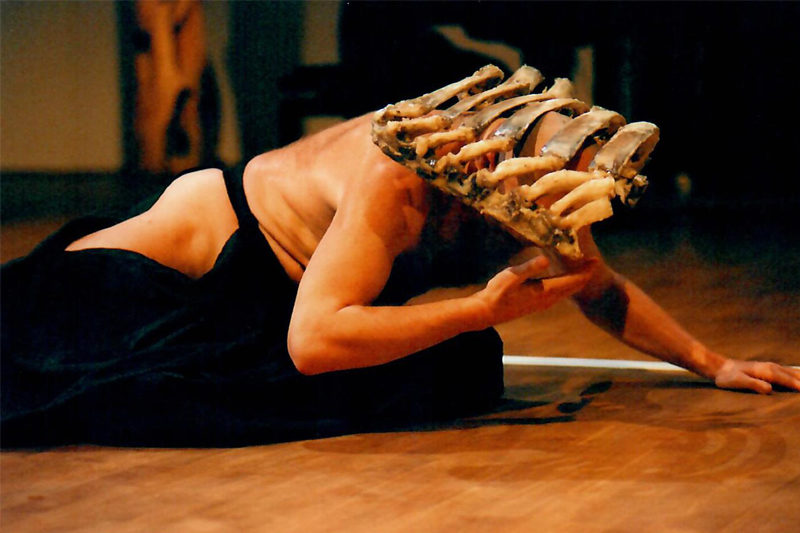 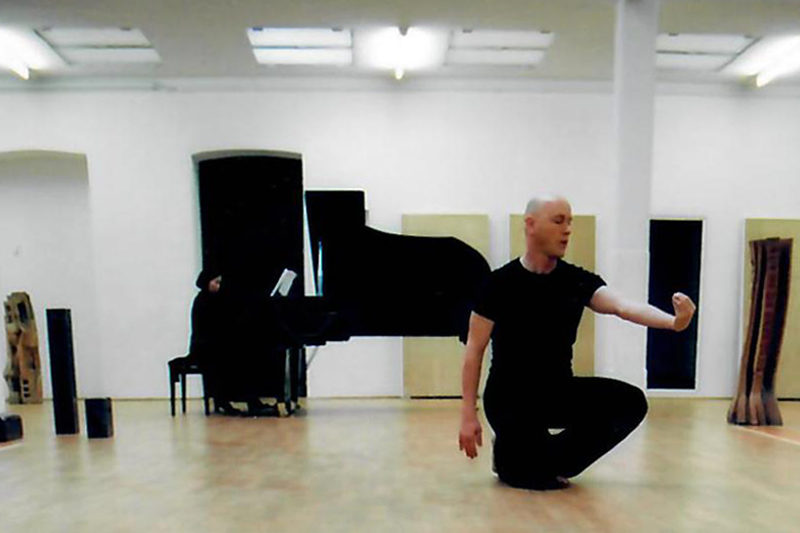 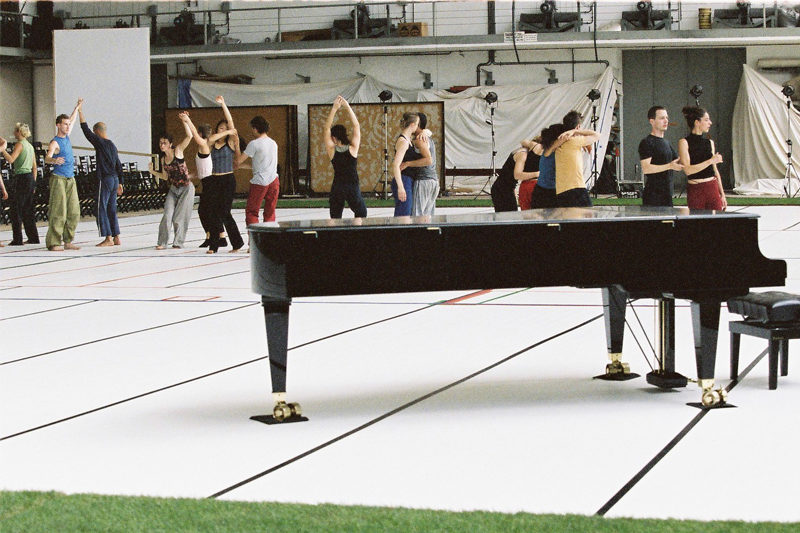 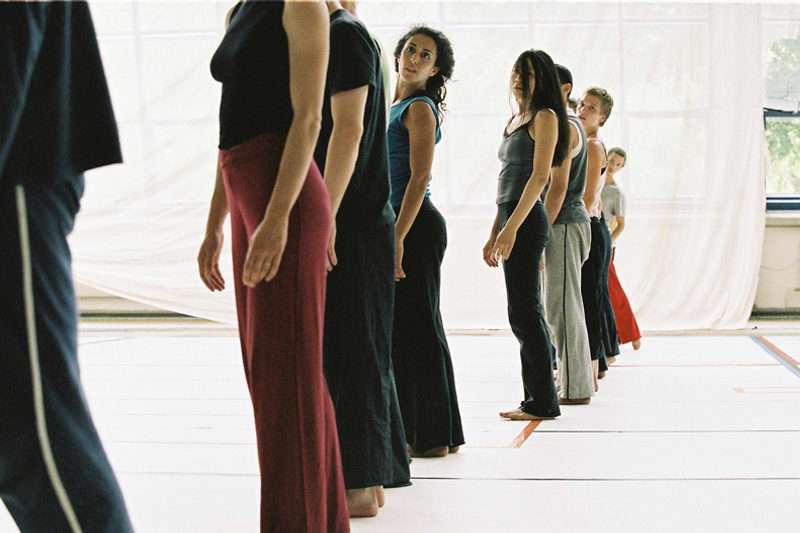 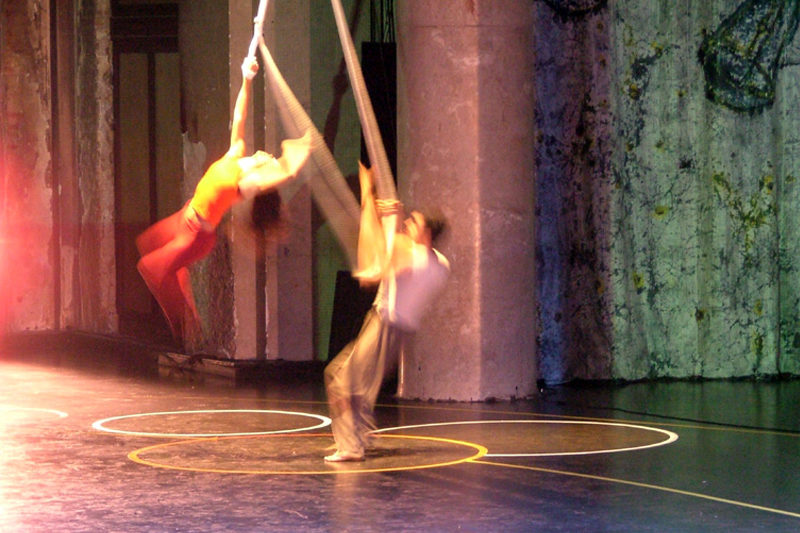 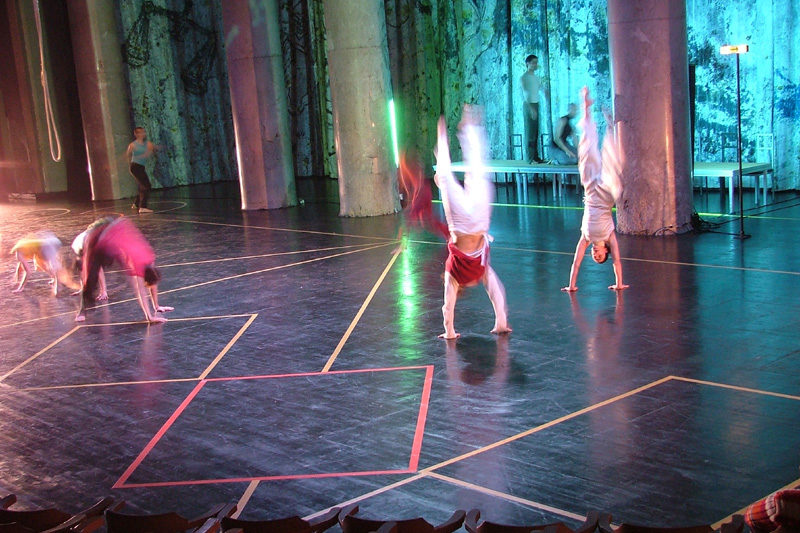 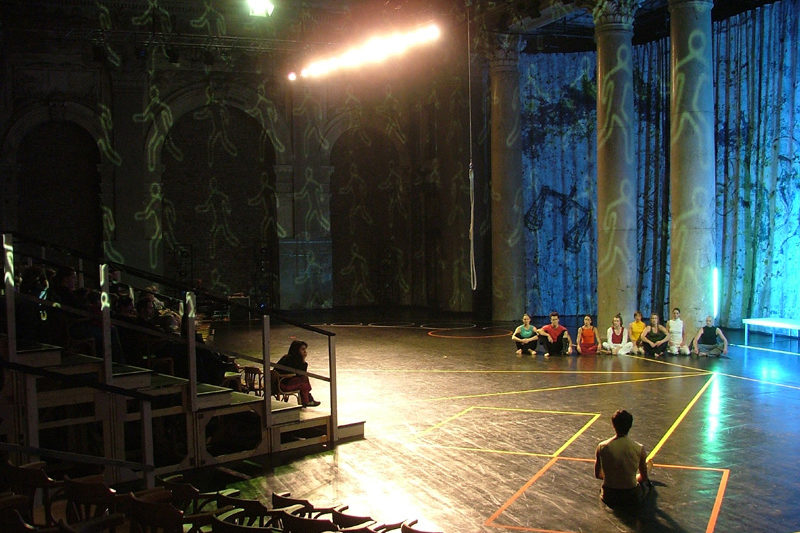 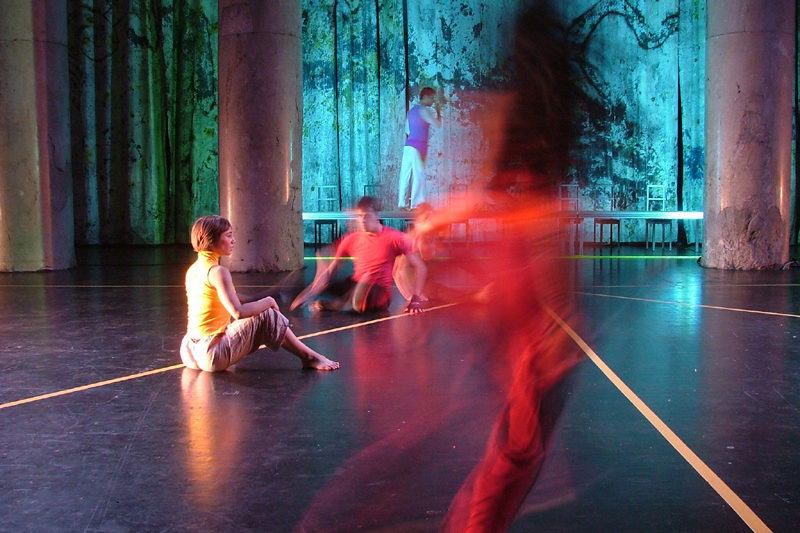 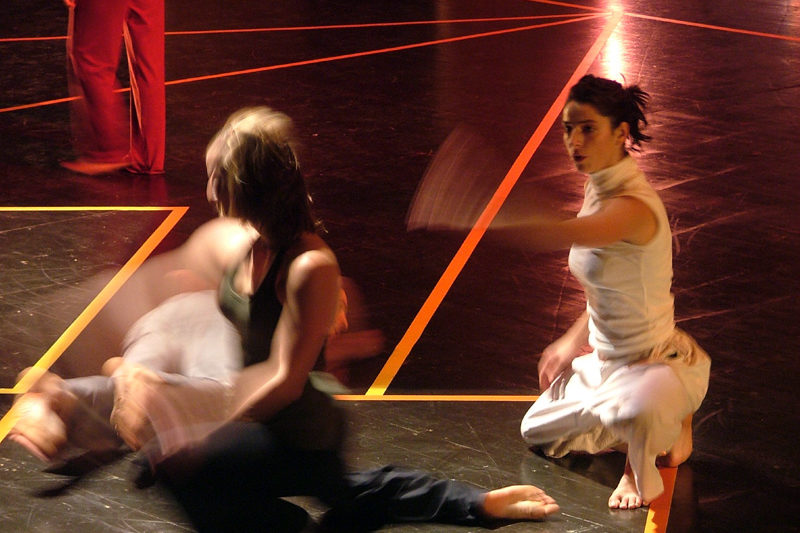 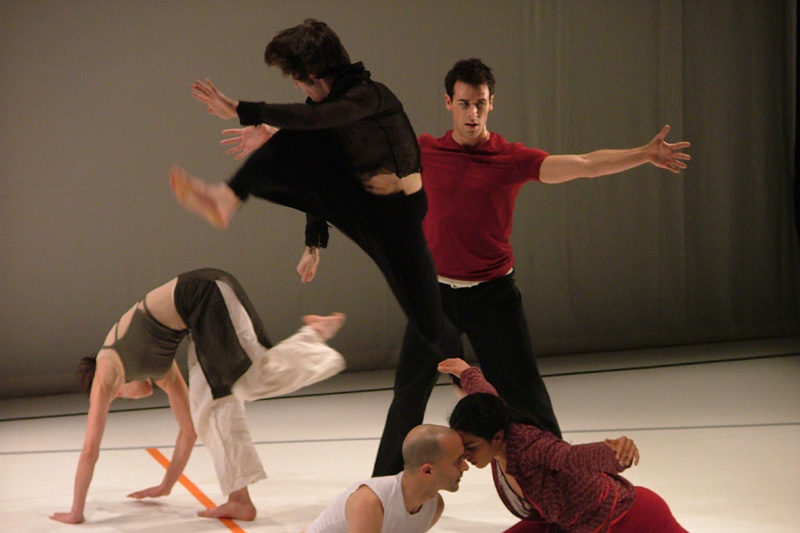 „This suite should be listened to and played with greatest inner calm. Nervous people stay away.’ – these are the introductory words of the composer Giacinto Scelsi to his “Suite No. 9, Ttai”, used by Cecilia Li to roll out the musical carpet for dreaming of bones. In dreaming of bones, the protagonists combine their experience of many years’ work with improvisation, space and their current study of an intermedia artistic matrix. The point of reference for dreaming of bones was William Butler Yeats’ play of the same name, which was inspired by the Japanese Nō-Theatre. Similar to Yeats’ text, the intermedia piece does not narrate as much as create atmosphere and rely on the power of images to call up associations. The motivating force for the intermedia dancing performance was the question to what extent it would be possible to distil body-related information from a literary text. On this literary basis, the atmospheric soundscape of Scelsi meets the film opus of Duncan Ward and Gabriella Cardazzo: a journey through structures that tell of human life, but are more resilient and can therefore act as shaping memories. Beneath and with real objects, stones, bones, and wooden sculptures: Sebastian Prantl. The danced particles of movement are not in the foreground but, organically and in a flowing change, cede the focus to the film imagery or to the objects.
By having an associative mind imbue them with spirit, this imagery can permeate flesh and blood.“
(Ulli Moschen)

„A journey through artificial and natural landscapes, to burial steles and ancient ornamentation, to the world’s history of art.“
(Ditta Rudle, www.tanz.at, December 2003)

The choreographic endeavour follows the concept of Nō-Theater distilling the kinaesthetic material in an alert fashion by pulling softly on a string – like unravelling knitwear. The conceptional pivot point challenges both the physical and spiritual activities equally. This practise shared among young protagonists of various cultural backgrounds, whose aim it is to break through academic codes of cultivating autarch movement vocabulary, redefines their bodyscapes. The distillation process starts in ensemble formation and fosters the soloist excellence.

“Dreaming of, becomes talking about”: the body as a bundle of bones, a heap of stones determined by weight and mass. Dancers describe a journey through “the hollows” of human fantasy. Fragments, flashes of emotion evoked by our (visible) world? Is it a formal world, which constitutes our drama? The kinaesthetic codes cannot be described – their physical feelings become manifest in gravity, flow, dynamics and relationships.

„Once more, Sebastian Prantl trains, tries and educates a new ensemble of dancers in his fine Vienna studio that is open to the public. Last winter, the choreographer started the research “The Dreaming of Bones” which is planned as a series of several elements […] His work with six young dancers lasted until March 30th, kinaesthetically coached by Ziya Azazi, who, years ago, was himself a member of Prantl’s ensemble […] We are watching up-and-coming artists trying to open their instrument, the body, and their mind to spontaneity, the courage to take risks, and a mixture of material form various cultures. This is actually an artistic apprenticeship on a very high level, complemented by Cecilia Li with music ranging from Mozart via Scelsi to Japanese Koto-music.“
(Andrea Amort, Kurier, March 26th, 2004)

Many different kinaesthetic patterns have a place in the dreaming of these bones, the research concentrates on the presentation by and of the dancers. Not a private, artificial miniature, but rather a representation of the proper personality is the focal point of Prantl’s specific style, which adopts a certain understatement and randomness, as well as a somewhat informal character. This constitutes a contradiction that can only be resolved through thorough study of Prantl’s working procedure… Patterns of movement are explored and discarded, picked up again at a different point and further developed – in the group, as a solo, in twos .”
(Edith Wolf Perez, www.tanz.at, March 2004)

The content is set on the virtuous interplay of sovereign characters, telling stories through their specific dancing code. The plot is enhanced by spoken text deriving from poetry of contemporary authors and filmic devices in the form of short narratives by the British Italian co-production of Duncan Ward and Gabriella Cardazzo.

„The seemingly morbid brick wall stands on the left; the thick columns are placed in the back and before the eyes of the audience. To develop his “Raumstück Land Body Scape” in the right way, choreographer Sebastian Prantl twisted the stage and therefore turned the stand of the Odeon-Theatre by 90 degrees: The dance parquet expanding itself almost endlessly in width. At the beginning nine dancers are sitting relaxed, maybe they are even sleeping at a table that is placed in the background. Slowly they come to life, developing movement and contact – to one another, to music, to space. By solo attempt, by two and sometimes in a tight group, the dancers conquer their place with intense effort. They swirl, spin, stride, communicating in an acrobatic manner, citing alien rituals, bowing in perfect style before classical ballet […]. Everything is possible. Everything is exciting, thrilling and allows any kind of deviation of the mind. With every turn of the kaleidoscope a new image appears, to moulder shortly after in order that the individual parts can be arranged anew. Sometimes Cecilia Li comes to the piano, becalming with gently sounds the turbulences on stage, suddenly electronics and dancers assault the space again. The scene consorts with words, poems in English, Italian, and French, spoken, whispered, declaimed, and incomprehensible. Those who are curious can glean the poems of Bachmann-translator Peter Filkins, Michel Houellebecq and Stefano Dadda in the program. Twitters and flicks, sighs and screams are also part of the performance that rightfully bears the name “Ein Raumstück für Tanz und Musik”. The glorious light display of Erich Heyduck has great part in the synthesis of the art. Ghostly grey shadows straying above walls and columns. Coloured spots appear like medieval window glass, breaking itself in the black-and-white decoration tapestry… There was dance. And this is the highest praise that can be awarded.“
(Ditta Rudle, www.tanz.at)

“Land Body Scape” defines a working field (surface) for eclectic dance (and music) language enhanced through film and light installation. Its content derives from the manifold interplay of culturally diverse characters and their virtuosic dance languages, manifesting in various dance techniques such as rope dance, Hip Hop, contemporary and classical… It also includes text as personal narrative, as well as text fragments from contemporary literature, thus supported and contrasted by film sequences (“Art & Space”, Duncan Ward/Gabriella Cardazzo) generating a multi-layered reading. All of it carefully rehearsed and processed through intricate improvisational analysis and structuring.

Over many years, Sebastian Prantl has developed specific improvisation techniques (flashback technique) out of the syntax of the post-modernist theatre, which bring the authenticity of theatre (dance) events to the fore and enable the protagonists to gain essential insights into their artistic potential. The lively, differentiated atmosphere of Sebastian Prantl’s working methods is based on the exchange of experience and the intensive perception of the other participants. Curiosity and the desire to perform bring protagonists of all ages and with the most diverse training together in superordinate choreographic structures. The choreographer’s leitmotif and concern is self-discovery – the development and expansion of one’s own language of dance.“
(Rolf Woltron)